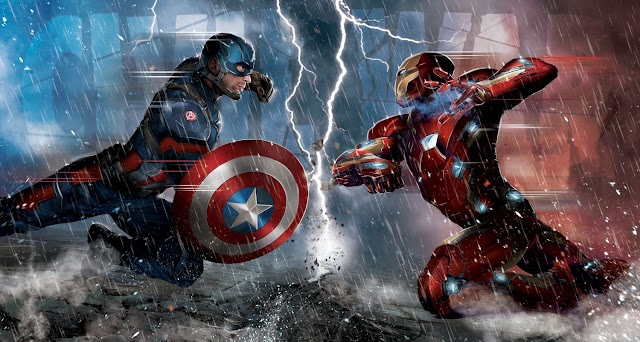 !!!There Be Spoilers Below!!!
I won't go too in-depth into the plot of 'Civil War', as by now I assume everyone is familiar with the story and it's beats. It basically boils down to our heroes disagreeing over two opposing ideologies. You have Iron man on one side agreeing to turn control of the Avengers over to the government by signing the Accords act, opposing him you have Cap, who feels any interference is too much entirely. Cue fighting, punching, cameos a plenty, even more fighting, and then the final revelation that was revealed to us two years ago. Of course there is a lot more to the story than that summation, but that is basically how it plays out.

As I was watching 'Civil War' two words kept repeating in my mind, consequence and vengeance. Consequence is probably the biggest aspect of this film, as the previous World endangering events that occurred in the MCU are examined for their alerting impact on mankind. Nick Fury might have had an idea to big together the world's most exceptional people, but what are the consequences of doing so? Yeah New York was saved from Loki, and Hydra was smashed, but again, at what cost to humanity?


Vengeance. Nearly every character in this movie is motivated to some degree by his, or her, need to seek vengeance for a past strife. Be it Black Panther for the murder of his father, or even the main antagonist Baron Zemo, whose master-plan is to seek retribution on the Avengers after the death of his family, caused by the destruction of Sokovia. The need to right a wrong through an act of murder, is a vital component in the structure of 'Civil war'. Just look at the films finale where Stark discovers that the Winter Solider was the one responsible for killing his parents. This realization sends our hero mad with blood-lust, for a moment he becomes the person he hates the most, the villain. Vengeance is such a powerful element in 'Civil War' it can turn good men bad, and evil men to insane acts. 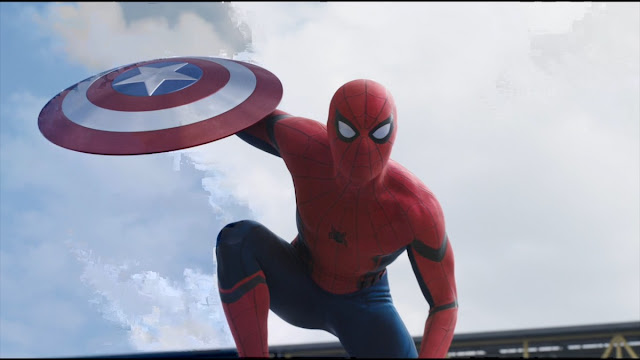 Among the many standout moments in the movie, and there are numerous - Spiderman's first appearance in costume, Ant-Man's surprise transformation into Giantman - it was a quiet little scene that stood out the most to me. Just as tensions start to rise in the group, Vision offers a theory on the escalating threats that continue to appear since the debut of the Avengers. His speech is very similar to the one Jim Gordon gives Batman at the end of 'Batman Begins'. As Vision puts it, "Our very strength incites challenge. Challenge incites conflict. And conflict... breeds catastrophe". Basically he is saying power, no matter good or evil, will encourage even greater power to try and best it. Defeating one evil only causes a bigger one to manifest, and so on. Or as Gordon warns so aptly to Batman "What about escalation!". This is a nice way of explaining how as heroes appear there must be villains to counter their strength, a sort of Chaos Theory in the superhero World. For a movie about costumed heroes punching each other in the face this is a rather deep analysis for the comic-book movie genre as a whole. Explaining how as one battle ends, it will invariably only lead to a greater one in the future, a sort of never ending cycle of 'one-upmanship'.

The most enjoyable aspect of this movie, besides all the wonderful action and explosions, was seeing the actors bounce off each other so freely. While the dialogue was a little forced and over the top in places, Downey and Evans sold every second of it, adding much needed pathos to even the silliest of scenarios. After 13 movies over 8 years we have spent a lot of time with these characters, and as an audience we are now fully invested in the MCU. It's thanks to this hand in hand relationship of character and continuation that we are able to enjoy this sort of long-form storytelling, which pays off so satisfactorily in 'Civil War'. One can't just throw a bunch of characters at the screen and hope it works, you need to tease events out, let relationships grow and fester. See the recent mishap of 'Batman VS Superman' for how not to adapt this sort of story to the screen. 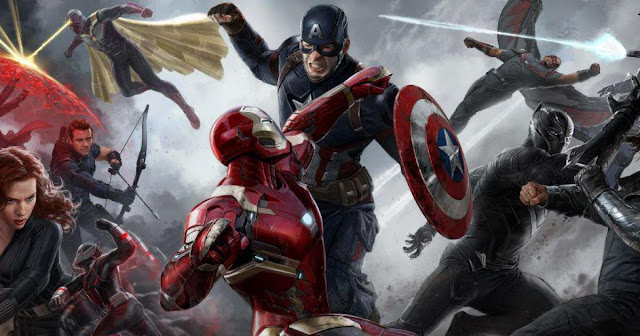 Now to the negatives, and unfortunately the movie does have a few missteps. No matter how competently the Russo's manage the rotating roster of characters, the simple fact is, there are way too many individuals bustling for screen time. In a movie titled 'Captain America' first and foremost it needed to be more focused on its lead. Admittedly the scenes with the other hero's are enjoyable, but still I feel we are taken away from the main story far too often, as we wander down many paths before the final pay off. While it's fun to see Spidey in the movie, he could have easily been cut out for pacing. Ditto Paul Rudd's Ant-man. There is even a running joke that most of the Avengers don't know who Ant-Man is. That kind of sums up how inconsequential his motivations are in the story, he has no time or investment made with the other members, besides Falcon. Again these are only small grips, and on the whole everything does work coherently together, I could just easily see this fighting for the top Marvel movie spot had it been more streamlined.

As a last objection I have to mention the shooting of the action scenes, the camera was way too tight on most of them, mixed with some heavy use of shaky-cam. No matter what one says about Joss Whedon, as a director the man can sure shoot a coherent fight scene. I really hope the Russo's can sort some of these little nitpicks out before 'Infinity War' rolls around, if they can we are in something truly special.

In summation. Spidey was awesome, probably the best live action incarnation so far. Black Panther was strong, noble and fierce, can't wait to see more. The movie itself was just about 20 minutes too long, with some of the padding exercised it could have reached true cinematic greatness. Still, compared to the dour visuals and murdering heroes of 'Batman V Superman' it stands as a total winner all round. Highly recommended.

I would personally rate the current MCU releases as follows, if anyone's interested: