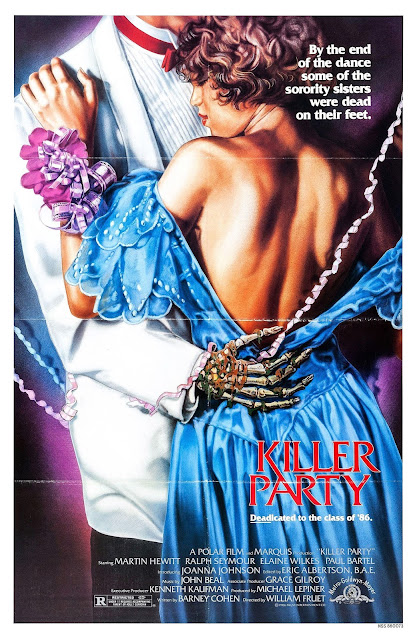 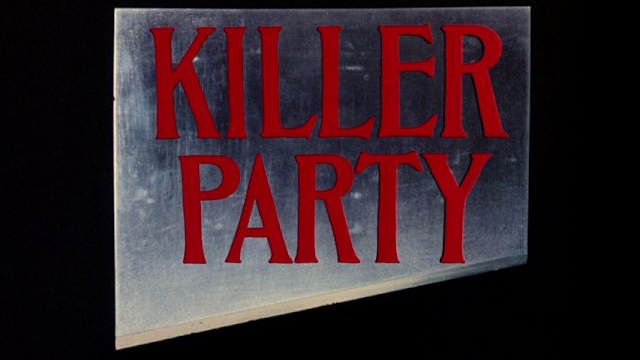 One thing I have to admit up front is: I love slasher movies! In fact they are probably my favourite sub-genre within horror. So combine a nice cheesy, slap you in the face with its '80s, slicer, and just to top it off let it be set at a college, or Sorority house, and I must admit I’m in heaven. 'Final Exam', 'Sorority House Massacre', 'Black Christmas', I love them all, so how the hell did I miss 'Killer Party'. A flick so subservient to my needs it humbly ticks all the boxes with ease, and yet still manages to throw enough 'curveballs', as well some genuine far out ideas, that it gleefully twists cliché, making it a great evening viewing.

The movie begins with a series of false starts - think a movie, within a music video, in the movie - we then meet three young girls, Jennifer (Johnson), Phoebe (Wilkes) and Vivia (Willis-Burch) who are desperately trying to become part of the most revered sorority on campus. Well let’s just say it doesn’t quite go according to plan, cue spooky abandoned house with ominous murderous legend - it even has a tombstone in the back garden - pranks on top of pranks, and you've got yourself a ready made smörgåsboard of slasher delights. 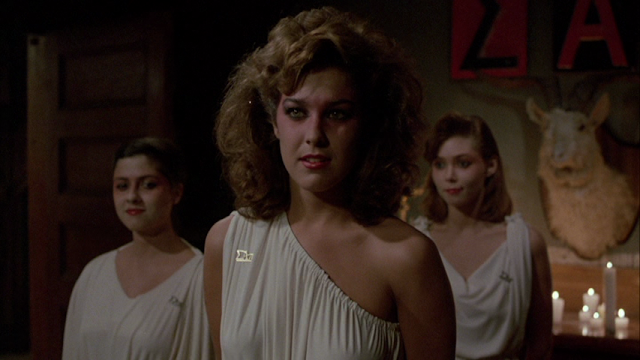 By the time the movie was released, we already had the 'Halloween', 'Friday the 13th' clones, and then the 'Nightmare on Elm Street' imitation's started to appear. 'Killer Party' decides to take every single one of these and even a few obscure ones, mixing it into an all out slasher greatest hits. From the fancy dress party (Terror Train), the sorority setting (House on Sorority Row, Final Exam) and of course the cursed house (Hell Night).

The real ace up the films sleeve however is the final act, which sees the cast get offed in a succession of carnage, as the killer's final reveal turns into a demented, slobbering, gravity defying mass of chaos. Without revealing too much, let’s just say it gets all Regan from the 'Exorcist', meets 'Evil Dead', up in here, as the movie finishes in the most 'batshit' – "Is that a monkey doin' maths?" - gloriously over the top way imaginable.
1986 College Forgotten Films God I Love '80s Slashers Hidden Horror Gems Possession Slasher