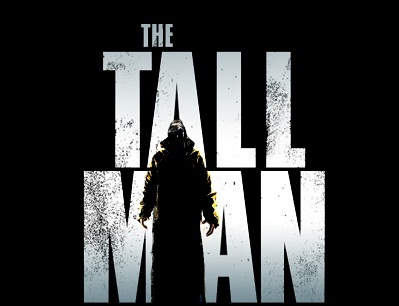 !!!Spoilers!!
French director Pascal Laugier returns with the cinematic cipher ‘The Tall Man’, having previously caused a major stir in the horror community with his visceral endurance test, ‘Martyrs'. Instead of another carnival of shock inducing images, Laugier has instead birthed a thoughtful little film, that while it presents itself as one thing, is actually another entirely.

Set in the small town of Cold Rock in the state of Washington, the community is like a ghost town since the once prosperous coal mine was shut down. Not wanting to forsake their homes the people stayed, despite the finical crises inflicted on them. Little did they know that things were only going to get far worse as their bad fortune took an even more horrible turn.

Someone, or something has begun taking their children one by one, could it be a person living amongst them? Or is it the entity the town has christened The Tall Man, an enigmatic figure who appears from the surrounding woods, snatching the children away never to be seen again. Sympathetic to their plight is local nurse Julia Denning (Jessica Biel) who has stayed on after the death of her husband, who worked as the town physician. Jessica try’s to help any that need her, particularly the troubled Jenny (Jodelle Ferland) and her mother who is locked in an abusive relationship. 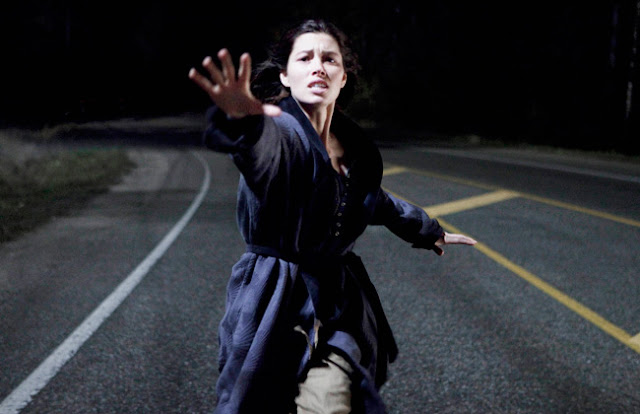 I debated whether to reveal the twist at the heart of this tale, but I felt not to discuss it in some manner would leave the review hollow, as it does happen quite early into the film and is not truly put into context until the films closing. If one were to look at the movie poster – featuring a dark hooded man towering over Biel – or the trailer, one would be of the impression that this is a by the numbers horror flick. You have your typical wooded setting, imposing ethereal figure in The Tall Man, and screaming unstoppable heroine in Biel, but then the movie starts playing on your expectations, constantly twisting them into surprising new directions. You see, about halfway through you begin to suspect that all isn’t right with Julia, could she in fact have been the one who has taken the missing children of Cold Rock, is she the real big bad of the movie. This well played shuffle instantly grabs the viewers wavering attention, turning a bland, seen it all before horror, into a fresh almost meta take on the genre. Had Laugier simply laid out another by the numbers thrill ride, this could be marked as yet another failed translation of a foreign director making his English debut.

It may lack some real definite dramatic punch, it still succeeds in giving the viewer more than they expected and how many modern horrors can you say that about. This is also another well placed attack on the ideals of the wealthy and privileged in society by Laugier, who again here has them conduct their own personal experiments on the middle class and poor of society. While ‘Martyrs’ featured rich socialites looking for the afterlife through heinous torture, this has them acting as invading kidnappers to relive the underclass of their supposed wasted and monotonous lives. Moulding would be future criminals and reprobates of society into their own preferred state, namely themselves. Thus breaking the endless cycle of criminal parents having criminal kids, and so on to infinite, now these new more accomplished citizens will now help, not hinder, society. These are some pretty deep thoughtful themes contained within a supposed by the numbers horror flick, that may become lost on some first time viewers.

Still, it’s refreshing to see such strong ideas in this day and age, especially from a horror/thriller starring Jessica Biel, the third lead from 'Blade 3', who I will freely admit to have never being a fan of, and only remember her from the underrated ‘Rules of Attraction’. Whatever her past roles may have lead you to believe, she gives a fine performance here as the put upon Julia, who suffers the tortures of the damn for her beliefs.

Another wonderful addition is Jodelle Felyand, a fantastic and intriguing young actress, that will be familiar to genre fans, from performances in Terry Gilliam's 'Tideland' (2005), the mini series 'Kingdom Hospital' (2004), as well as the original 'Silent Hill' (2006). Most recently she appeared as a zombie hillbilly in the awesome meta horror 'Cabin In The Woods', hopefully we will see more of this actress in the future, if she doesn’t fall into the dreaded and sometimes inescapable world of direct to DVD horror.

I can see 'The Tall Man' entering into the canon of must see, unappreciated horror gems, as more people discover it. I can already picture it appearing in countless websites, as the author demands their readership to please check out this little seen horror gem. Well if they're not, please let me be the first, because while it’s not a classic by any stretch of the imagination, it’s still a very well made exciting little film, that should have gotten a lot more recognition. So yes, please unearth this hidden horror gem. I would love to see Laugier return to the horror genre for real next time, as I really dig his brutal sometimes painful, excursions in this genre, I still see his completing of the 'Hellraiser' remake to be a great loss to the genre, hopefully his next project will bring him the credit he rightfully deserves.
2012 Forgotten Films Hidden Horror Gems Horror Jessica Biel Pascal Laugier