'80s John Carpenter, The Cult Films That Defined A Decade 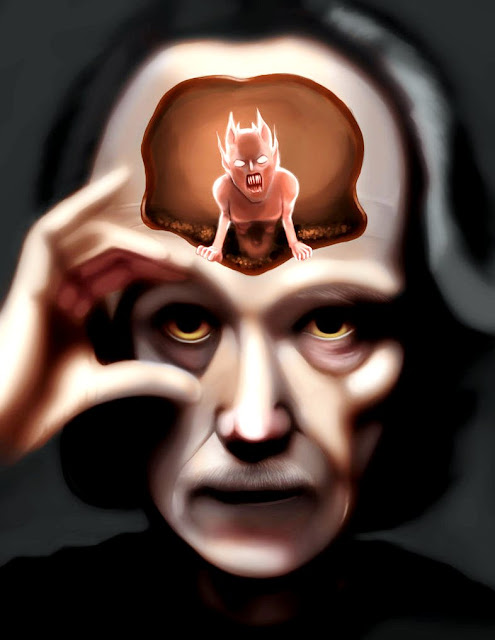 "In France I'm an auteur, in Germany a filmmaker, in Britain a genre film director, and in the USA a bum"

John Carpenter
From 1980's 'The Fog', to the decades end 'They Live', John carpenter carved out a formidable line up of cult items. These films established him as a cinematic icon whose work continues to inspire directors working today, who homage, or just plain steal his ground-breaking techniques. 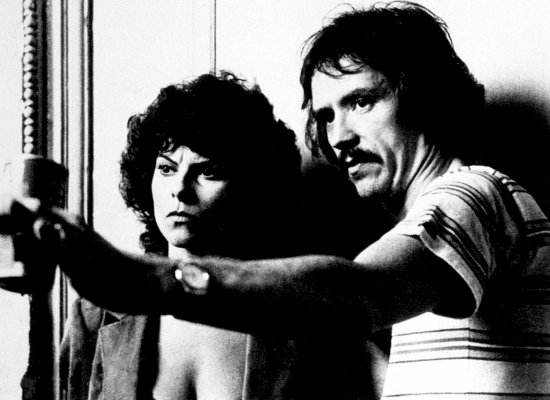 The 1980s were a very exciting time for cult and fantasy themed movies, films like 'Gremlins', 'Ghostbusters', and 'Back to the Future', nostalgically brought audiences back to the glory days of 50's sci-fi paranoia, with mutant creatures running amok and mad scientists. The children of the baby boom were now coming of age and they had a new set of toys. '50s kid John Carpenter, who after a number of successes in the 70's, was now finally free to indulge in his childhood fantasies of alien creatures, E.C flavored ghost stories, and tough talkin' anti-hero's.

Carpenter's first '80s movie was the low-fi horror masterpiece 'The Fog', a ghostly tale of revenge, that has a small town coming under siege from a murderous green fog. What the towns people don't know is, the fog is inhabited by a band of lepers who were tricked into crashing their boat by the towns founding ancestors. 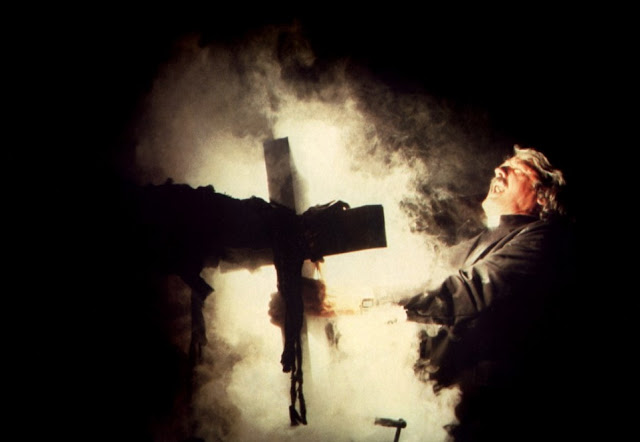 With the success of the movie, Carpenter set about a return to his sci-fi roots, with '81s 'Escape From New York'. This would be his first sci-fi film since his original feature in 1976, the space parody 'Dark Star'. 'Escape From', would also be his second time working with Kurt Russel, the two having worked on Carpenter's TV movie 'Elvis', a few years earlier. This would be the start of a successful partnership, that would result in three of Carpenter's most satisfying movies. 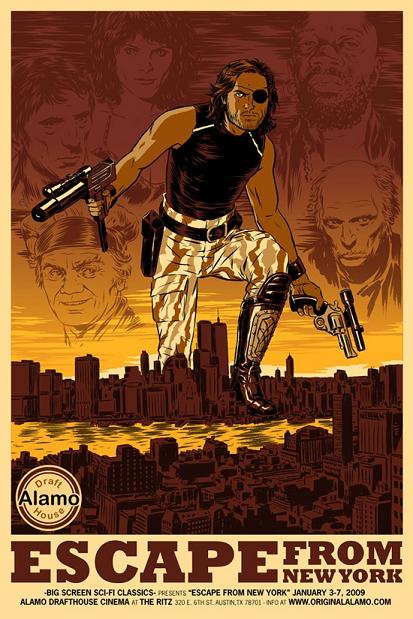 A riff on the spaghetti westerns of Sergio Leone, 'Escape' deftly mixes an inventive sci-fi tale, with Russel's tough talkin' Snake Plisskin, as its stone cold heart. Made an offer he can't refuse, Plisskin is the only man who can enter the city-wide jail of New York, in the hope of retrieving a captured United States President, and most importantly return him safety to deliver an urgent message that will stop an all out war. Another hit for carpenter, this would unfortunately be his last box office success for a number of years, as his next movie would be his biggest commercial disappointment yet.

'The thing', although having been made previously in 1951 by Howard Hawks (The Thing from Another World), Carpenter set out to make a more faithful adaptation to the novella 'Who Goes There?' by John W. Campbell, Jr. 'The Thing' would also mark a number of firsts for Carpenter, thanks to Universal Pictures he had the largest budget yet - 15 million - to work with, along with innovative special effects by Rob Bottin, and visual effects artist Albert Whitlock. Carpenter also had someone else score the movie, the Italian master, Ennio Morricone. Casting Kurt Russel again in the lead as McCready, along with a troupe of veteran actors, 'The Thing' was a claustrophobic trip to hell, where your best friend could be the devil himself. 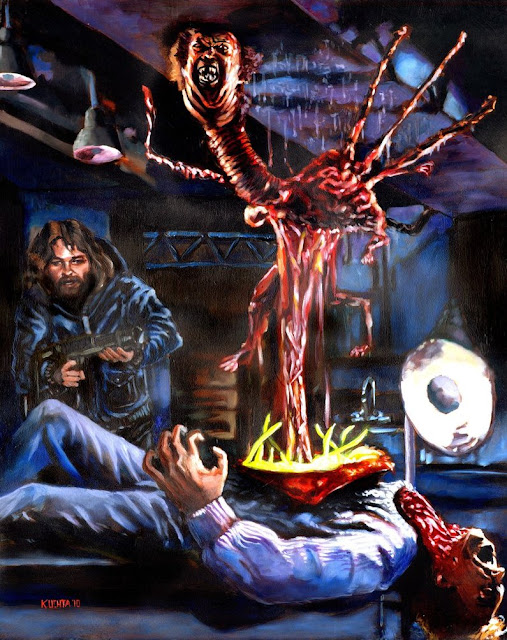 Unfortunately Carpenter's masterpiece was savaged by a different alien on its release. Two weeks prior 'E.T', Spielberg's mega hit, had brought a different slant to extraterrestrial lifeforms, crushing Carpenter's violent genre film. Devastated by the failure of his dream project, Carpenter's next film was a return to the smaller budgeted movies he was comfortable with. Hoping to exploit a growing cult at the time, the Stephan king adaptation, Carpenter toyed with a number of King stories. Initially hoping to make 'Firestater' (which later became a Drew Barrymore vehicle) with Universal , instead he went for 'Christine' centered around a demonic 1958 Plymouth, that kills people. 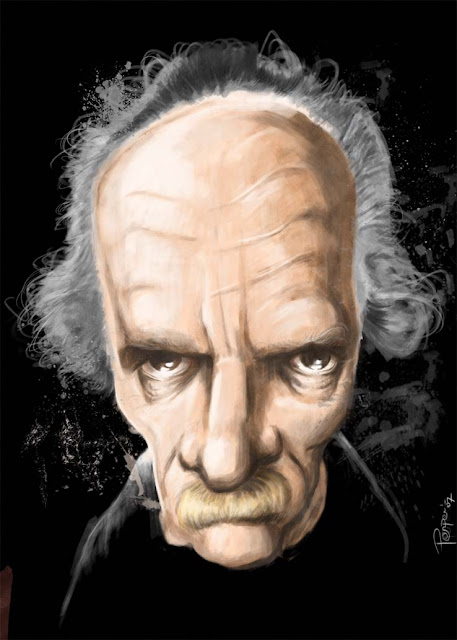 With 'Christine' gaining Carpenter some credit back, he returned to Sci-Fi with 1984's 'Starman', which would not only receive critical praise, but became a modest box office success. Starring Jeff Bridges as a stranded alien on earth, 'Starman' was more a romantic comedy, like those of the great Frank Capra (It Happened one Night) with small elements of sci-fi mixed in for good measure. The film even garnered nominations from the Oscars and Golden Globes for Bridge's performance. 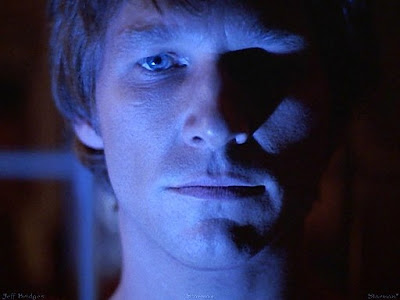 It would be another two years before Carpenter released another movie, having passed on a number of projects in the mean time, including the Dudley Moore starring 'The Santa Claus Movie'. Re-teaming with Kurt Russel, Carpenter set out to make one of his craziest, but most enjoyable flicks, the Kung Fu saga, 'Big Trouble in Little China'. 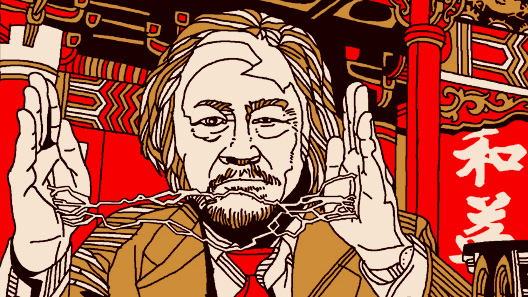 As before Audiences didn't get the movies wild comic storyline, and again this marked another disappointing turn out. As well as ending Carpenters and Russell's pairing, until 1996's ill conceived sequel 'Escape From L.A. Carpenter' would complete two more movies before the end of the decade, 1987's 'Prince of Darkness', and 1988's 'They Live'. 'Prince of', would act as the second film in Carpenter's loose trilogy of movies known as 'The Apocalypse Trilogy', starting with 'The Thing', and finished later in the '90s with 'In The Mouth of Madness'. 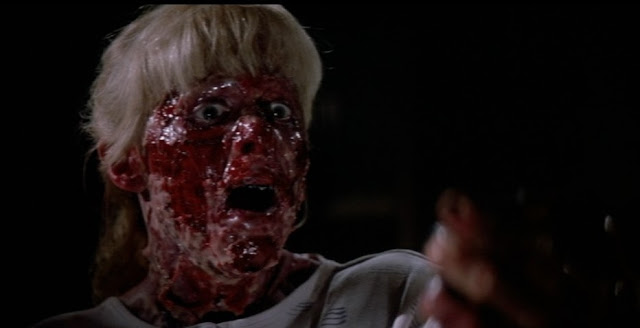 'Prince of' is a very interesting film in that it deals with the Devil, who is encased in a large canister in the basement of a church. As his power grows it has a damaging effect on the flesh and mind of those around it. Over the years since its release the movie has amassed a large cult following and spurred Carpenter to create the trilogy closer 'In The Mouth of Madness'. 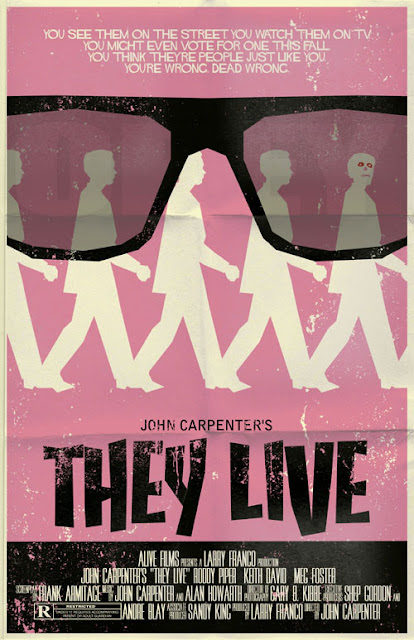 'They Live' is a fantastic throwback to the nostalgic days of 50s cinema, with  Rowdy Roddy Piper's anti-hero acquiring a pair of sunglasses, that reveal earth to be swarming with aliens disguised as us. Although not as accomplished as his previous films, the movie has aged well over the years, with a number of its scenes entering cult movie lure. From cinemas longest fight, to the classic line, "I came here to chew bubble gum, and kick some ass, and i,m fresh outta bubble gum". 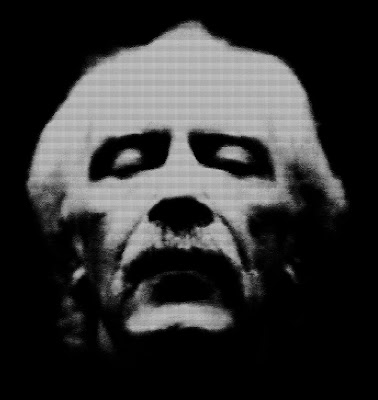 "Hollywood is a weird place. The film industry has changed. Business is bad. Directors are treated like bums now. This is a bad time for creative people. Hollywood is a mean place to work"

What carpenter achieved over a singe decade most directors take a lifetime, unfortunately looking at his later output, it would seem he mined every inch of his imagination and creativity. For all the magic he weaved in the 80's, the '90s and '00s would prove a serious decline in the quality of his output to the point he was copying his own movies. 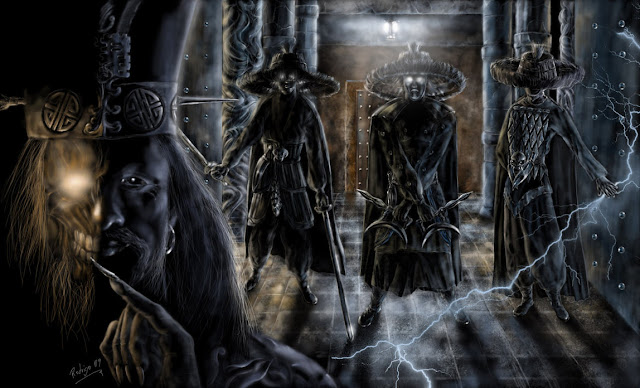 Carpenter was not a man who was afraid to push himself creatively into every aspect of his movies, from his revolutionary camera work, to his memorable and exciting original musical scores. A true original, who took the movie camera and added new angles and gave us a host of fascinating, iconic characters. Carpenter is without question the Orson Wells of '80s cult cinema, and like that bright exciting talent, he burned himself out far too quickly, leaving behind a monumental array of early classics.
Cult Movies. Forgotten Films Horror John Carpenter sci-fi