On the 75th anniversary of the first appearance of The Joker, 'Suicide Squad' Director David Ayer revealed on his Twitter account Jared Leto's radical new take on Batman's most famous foe. I remember thinking at the time quite clearly, “What the actual f**k?”

I was never one of those people who hated on the idea of Heath Ledger as the Joker, after seeing his damaged, brooding turn in 'Broke Back Mountain' I knew he had the necessary acting chops to carry the character. When the now infamous troll-hushing photo of Ledger in full Joker face hit the web, any lingering fears I had completely dissipated. For my money this was one of the greatest reveals of a character, comic or otherwise, I had ever seen. His  face peeking out of the darkness. A hint of his features covered in ghostly white makeup. His eyes like two sunken craters, black and terrifying like a shark. The ridges of his razor-blade smile sickeningly protruding from the corners of his red smeared mouth. It was so eerie, and electrifying, that it instantly shut every hater the hell up. Now with this fourth live-action interpretation of Mr J what are we given? Some bad Joker-esque cosplay monstrosity, mixed with the visual aesthetics of James Franco's Alien character from 'Spring Breakers'. Never did I think I'd see the day I'd be picturing James Franco, while looking at Batman's greatest nemesis. Now here's a crazy thought: Harmony Korine directing a Joker solo movie, remember,  you heard it here first. 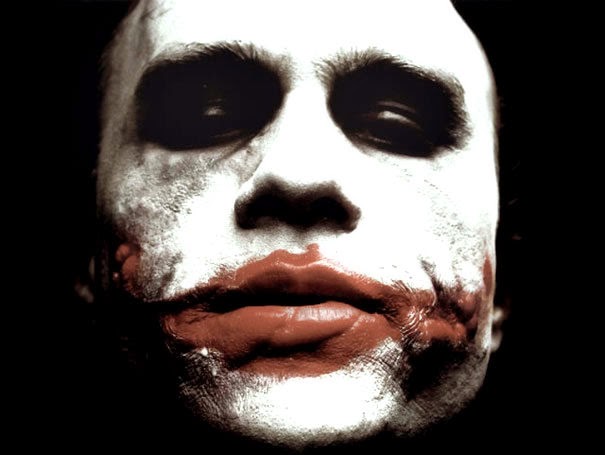 I still can't believe that executives at Warner Bros signed off on this shirtless tattooed gangsta' version. I can understand the tedious need for DC and Warner to counter Marvel by going darker and gritter with their characters, it's just those tattoos are so head-scratchingly awful. "Damaged" written right there on his forehead, the words "Ha Ha Ha" all over his chest, what the hell? That purple glove is especially maddening. The Joker maybe known as 'The Clown Prince Of Crime', but that stupid glove just makes me think of Prince, plain and simple. The annoying thing is if Zack Snyder (Batman V Superman) had been involved in the thought process behind this incarnation, we might have had something more comic accurate. However you feel about Snyder's direction and constant use of slow-motion, the guy gets how a character should be presented.

Every iteration of the Joker, no matter the look or context, has gotten his sense of style and mannerisms right. The Joker may be a wild and crazy loon, but he keeps that hidden until the time is right. He's charming, calculating, and he's also one of the most dangerous sociopaths imaginable. This new look is just too upfront and garish to truly capture the spirit of the character, at least that's how I see it. After the lukewarm reception he has received in 'Suicide Squad', from fans and critics, it isn't even certain if Leto will return to the character. With talk of a soft reboot being introduced in the upcoming 'Flashpoint' movie, that could leave the door open for Matt Reeves to reinterpret both the Joker and Batman into something approximating their comic counterparts. Either way the damage has been done, both to the character, and the public perception of the comic-book genre that classics like 'The Dark Knight' strived to endear.
Comicbook movie DCU Heath Ledger Jared Leto News The Joker