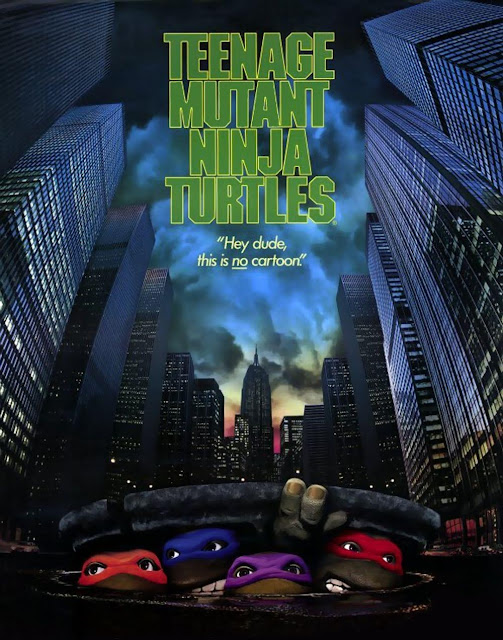 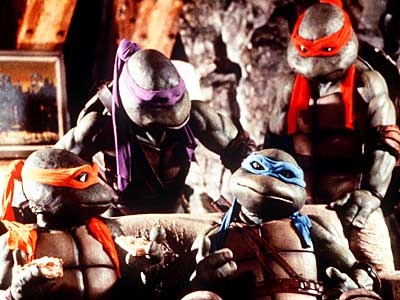 As well as shedding some light on the Turtle's origins, this movie also has the Turtles doing battle with their greatest foe, Shredder. With only reporter April O'Neil (Judith Hoag) and masked vigilante Casey Jones (Elias Koteas) as allies, they must work together to stop Shredder and his evil Foot Clan.

Utilising state of the art puppetry effects from Jim Henson's creature shop, to bring the hero's in a half shell to light, the movie surprised people who never expected the Turtles could be successfully brought to the big screen. 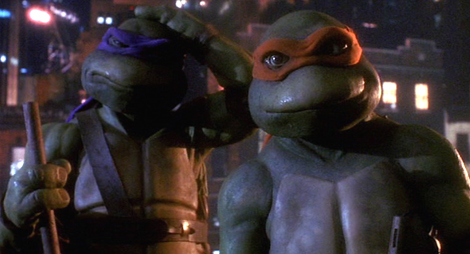 Unfortunately this would be their most successful live action outing, as the next two sequels became ever more kid friendly and toy marketed.

"Back by bodacious demand", the second Turtles movie continues exactly where the first film ended. The Turtles are now living with April O'Neil - until they find a new home - while the Foot Clan have moved to a large junkyard, where Shredder's second in command Tatsu has made himself the leader. 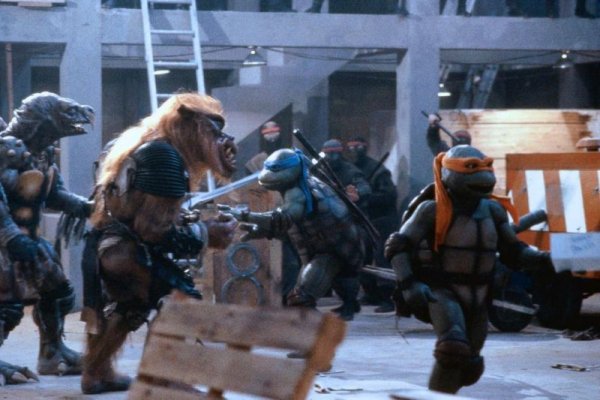 However, Shredder soon returns with his sights set on an industrial organization,Techno Global Research Industries (TGRI). Who have developed a toxin that causes mutation in plant growth. With Shredder wanting to harvest this 'ooze' for his own nefarious plans, the Turtles must find a way to stop him, while also discovering a little more about their own origins. 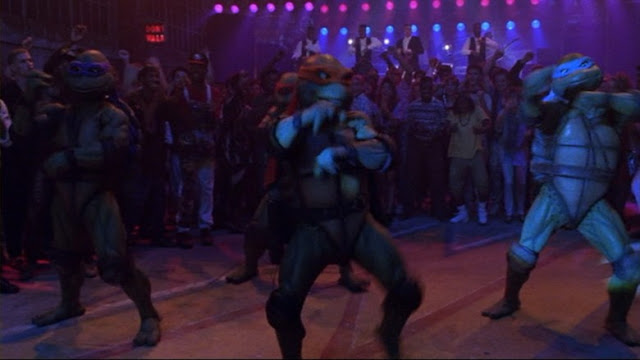 A noticeably weaker entry over the original movie, Secret of the ooze is still an enjoyable adventure, that if nothing else will entertain kids. It also has the distinct pleasure of being Vanilla Ice's film debut, enough said. 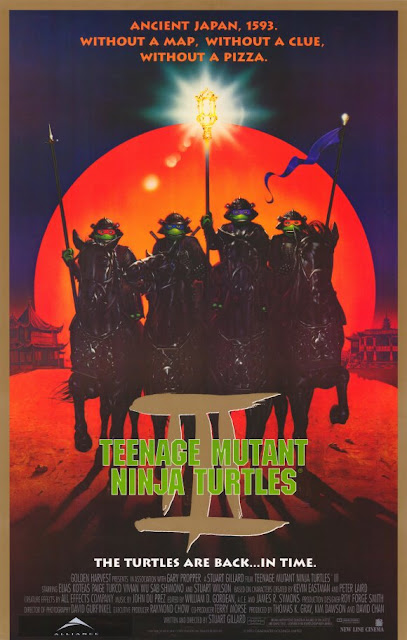 Scraping the bottom of the Turtles movie barrel, we find Teenage Mutant Ninja Turtles III. Which features a surprise return of Elias Koteas, as Casey Jones. 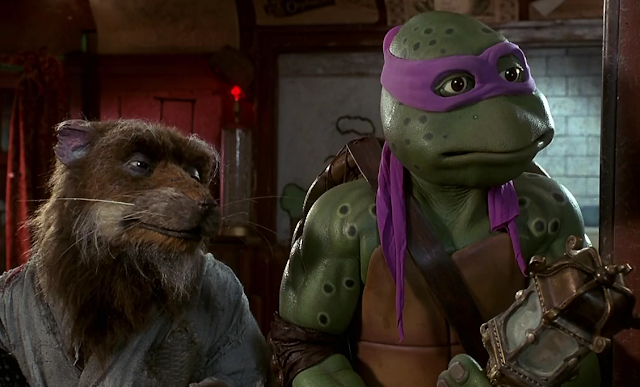 The plot this time has the Turtles use the "Sacred Sands of Time", to travel back in time to feudal Japan in a bid to rescue April. Once there, they become caught in a conflict between the Daimyo and a group of rebellious villagers.

By this third outing the studio had done away with any attempt to appeal to adults, instead they set their sights on kids, in what feels like an over long toy commercial, that has very little to redeem it. 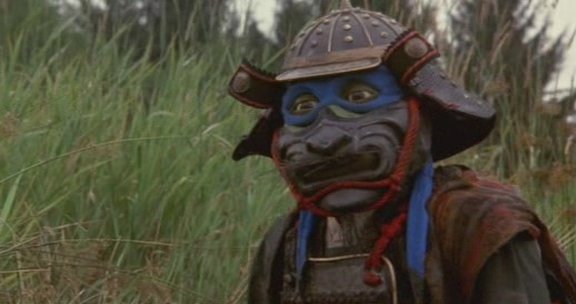 A sad way to end the trilogy, as the time travel gimmick could have been used far more effectively. 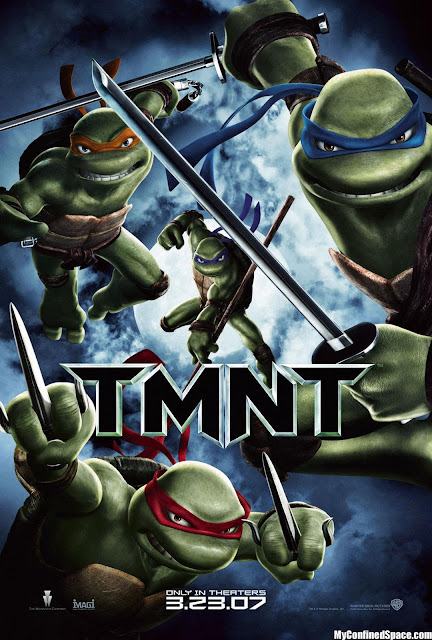 Abandoning the live action format in place of popular CGI, this fourth Turtles movie sets out to be the best adaptation yet.

Taking place after Shredder's defeat, the team has spilt up to pursue their own interests. Leonardo is training in Central America, Donatello and Michelangelo have jobs, and Raphael has become the vigilante known as 'Nightwatcher'.

The peace doesn't last long for the Turtles, when Max Winters - an immortal warrior who tried to take over the world 3,000 years ago - starts causing havoc, as he searches for his lost Generals. With the world in danger the Turtles must rejoin once more in the hope of stopping Max Winters, all in enough time for a hot slice of pizza.

A noticeable improvement over the previous two sequels, TMNT is at least on par with the original. Not quite the epic Turtles movie fans had hoped for, this at least brought back some adult themes to the series.
Recommended Release: 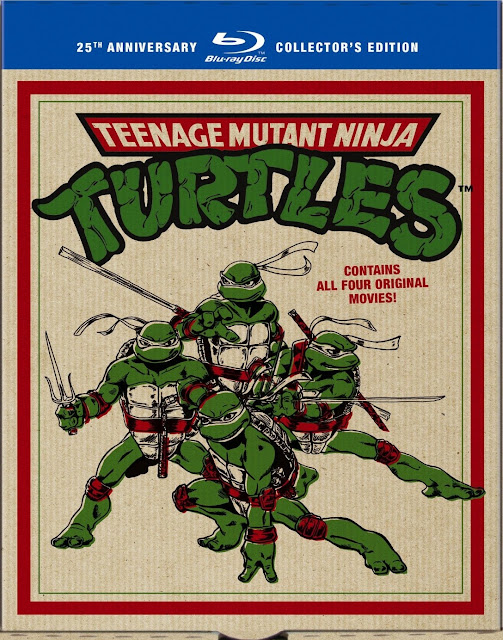 This set has been criticised by Turtle fans and reviewers who dislike its cardboard packaging, that replicates a pizza box. I can see how the  design has angered fans, but I think it's still a neat idea, that was unfortunately poorly executed. Still if your a fan of the movies and the characters, this should more than please your Turtles craving, thanks to the amount of material on offer. 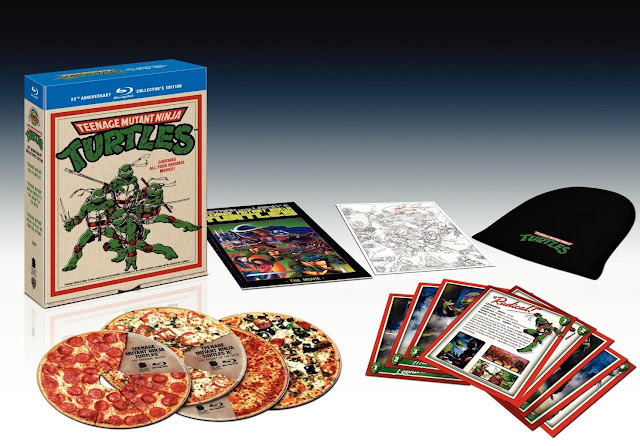 Presented in a 1080p/VC-1 transfer, this does an adequate job of bringing the movie into the high-def world. Colours are a little dull, but the level of detail especially on the Turtles more than makes up for it. The three live-action films are very similar in the sound department and all use a Dolby TrueHD 5.1 surround track. Again presented in 1080p/VC-1 encode, this is a slight improvement over the first movies transfer, but is still only passable. The least successful movie gets the best transfer out of the three live action movies. The picture here is brighter, sharper, with a noticeably deeper contrast in colours. TMNT is brought to Blu Ray with an superior 1080p/VC-1 transfer, that offers a myriad of colourful imagery that pops off the screen. TMNT comes with a Dolby TrueHD 5.1 surround track, that fully captures all the Turtle flavoured kicks, chops and wise cracks.