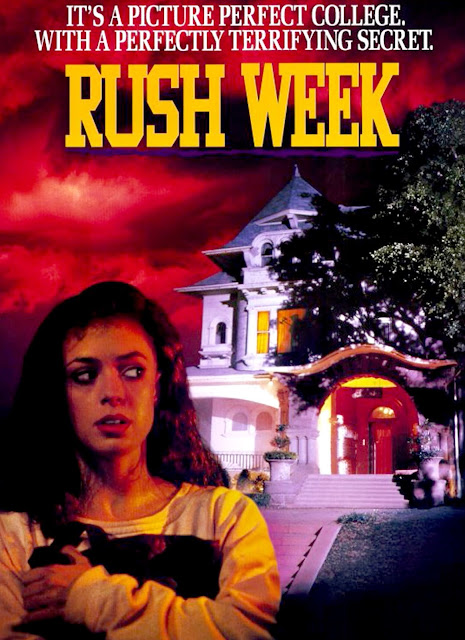 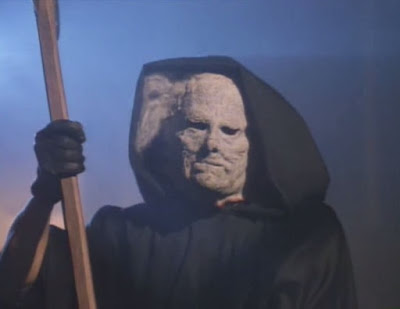 As was noted on another slasher site I read, ASLASHABOVE, 'Rush Week' was one of the last, if not, the last, slasher released in the '80s. From the dizzying highs of 'Friday the 13th' in 1980, to these gore-less, almost spoofs, that populated the later years. While I love all '80s slashers, even I have to admit there are more bad examples than there are good. Unfortunately for every classic like 'Sleepaway camp', there is a 'Blood Lake' to counter one's enthusiasm. Not that 'Rush Week' is a terrible movie, it's just really conventional, like the slashing and the killer are an after thought, as the rest of the movie is filled with 'Porkies', 'Animal House' type antics, and cliché characters- the nerd, the jock, and the plucky reporter.

When this movie was released the genre had already passed from the early trail blazers, to the SOV abominations, and by this late in the decade we were onto the lazy cash grabs. While there were some great late '80s titles, like 'Maniac Cop' and 'Intruder', the genre was really in the death throws. It did manage to limp on until 1996, when 'Scream' reinvented the slasher as a tongue in cheek, meta observation, on the genre and it's rules. It has now been 20 years since Scream deputed and still fans are waiting for another revival. Surely with enough time there will be another.

'Rush week' is a serviceable entry into the genre, if you're a fan of these movies it will easily fill a few hours, but there are certainly better examples that you should check out first.
1989 College Forgotten Films God I Love '80s Slashers Slasher