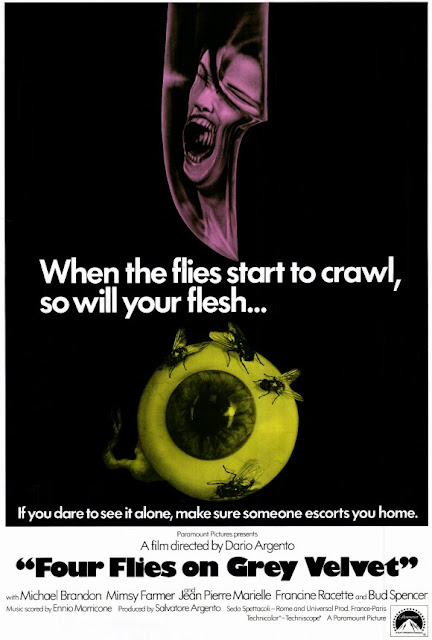 Argento finishes his first series of groundbreaking gialli with 'Four Flies on Grey Velvet', one of his more seldom viewed and difficult movies.

The story revolves around musician Roberto Tobias, played by Michael Brandon. On noticing that he is being followed by a mysterious man in a dark coat and glasses en route to a club one night, Roberto confronts the man, leading to a fevered chase into a disused theatre.

A fight ensues between the two men, resulting in what appears to be the stalker's death. High above the murder scene, a creepily masked figure with a fixed smile takes incriminating pictures of Roberto and the apparent murder. What follows next is a cat and mouse game, between Roberto and the masked man, who begins blackmailing the protagonist, before killing those closest to him.

In terms of style and music, composed by Ennio Morricone, a favourite of Argento, the movie is a success. However, with regard to pace and story elements, it can seem to drag for long stretches. Argento has a habit of adding uneasy humour and comic styling to his movies, more so here than his later Gothic nightmares. As an example of Argento's gialli, and of giallos in general, this is still a top notch release, despite whatever faults are inherent in the film.
1971 Dario Argento Forgotten Films Giallo