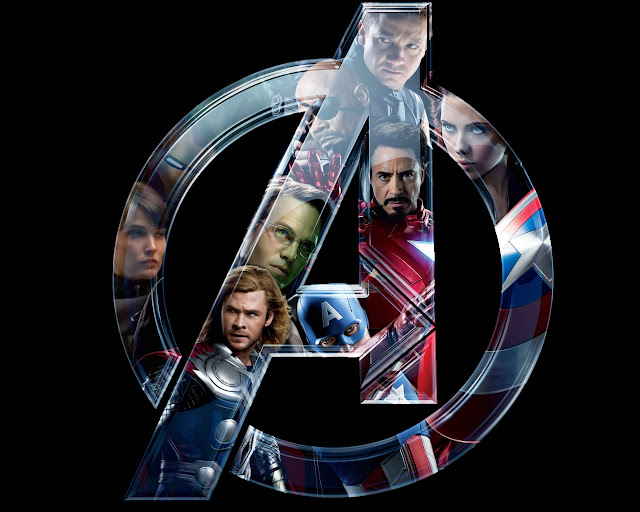 “There was an idea to bring together a group of remarkable people, so when we needed them, they could fight the battles that we never could”.


Taking the cinematic concept of the comic-book movie to a greater height than has ever been seen before, 'The Avengers' brazenly attempts to juggle a vast assortment of characters, be they human, monster, or God. After five carefully planned years of foreplay, 'The Avengers' can be seen as the ultimate superhero eruption of comic joy, as it finally brings Marvel's A-list heroes to the screen...but has Joss Whedon managed to meet fans' fevered expectations?

As a confirmed movie-nerd, 'The Avengers' feels like pure cinematic fantasy, it shouldn’t by right exist, but blissfully it does. While I feel the movie is far from the greatest of the genre - hello 'Dark Knight', 'X-Men 2', 'Spiderman 2' - what I will say is that the last 30 minutes are unlike anything I have seen in a superhero movie before, as New York plays host to a kinetic brawl that is by far the best representation of a comic panel to celluloid ever captured.

In one continuous giddy blitz of costumed craziness, we see the newly banded Avengers protect the city from an alien horde as director Whedon goes epic. This tantalising final reel brings to fruition a million fanboy expectations as the awe inducing sight of the ultimate superhero team up brings the pain and saves the planet. Not even Bryan Singer's mighty 'X-Men' films had a moment like this. This is the real deal, a super-smash brawl with all the wet dream moments you could want: Iron Man flying through the sky shooting lasers at a vast alien ship, Hawkeye jumping off a building backwards in a cascade of explosive arrows, Black Widow commandeering a vehicle mid-air, Thor catapulting 'Mjolnir' into a horde of enemies, and the stirring moment when Cap becomes the leader he was born to be.

As if all these glorious moments weren't enough, I still haven't mentioned 'the other guy' - fantastically portrayed by Mark Ruffalo - the true pièce de résistance, the mean green Hulk. After two mildly successful movies, a ropey TV show and numerous animated features, we finally get the rip roaring let-loose Hulk we’ve been waiting for. Moment after moment of iconic scenes: Hulk clobbering enemies with ease, riding a crashing spaceship 'Dr. Strangelove' style, taking on Loki, chasing Black Widow like a horror movie monster, and the fist pumping moment he catches a wounded Iron Man right out of the sky like a stray baseball. The one downside to the epic last half, is that it leaves the first wanting, making it seem even mediocre in comparison. The start in particular feels strained, as the 'News-Team assemble' call goes out and each character has to be reintroduced. This is by far the slowest part of the movie as we build towards Loki's inevitable capture and escape on-board Shield's Helicarrier, eventually the movie does begin to pick up pace, as the dream-team mingle and spark off each other, leading to a friends death and their first defeat. 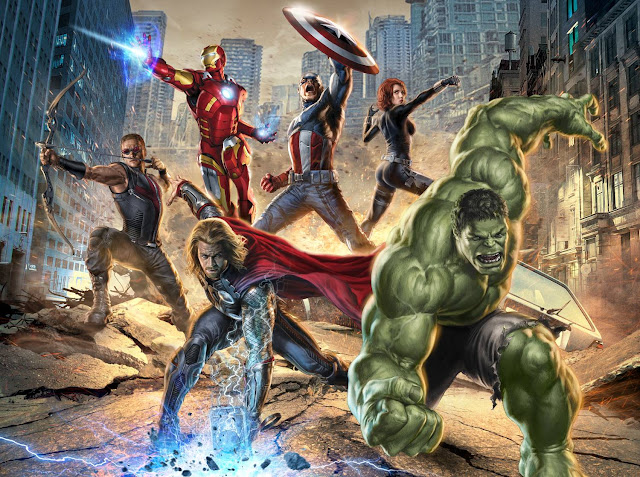 One of the most successful aspects of these Marvel movies, and thankfully present here, is the much needed humour and playful sense of mischief, with 'The Dark Knight' it became a knee-jerk reaction for Studios to cry 'Go darker'. While that works for 'Bats', I don't think it would work with these characters, this is of course thanks to the wise cracking, nothing to lose approach that went into the making of the first 'Iron Man', which has now been implanted as a stable for all subsequent Marvel movies. This is after all truth be told as much for kids as it is for adults, and I’m okay with that. I think Batman has matured into a darker adult orientated character, but Thor, Cap and Hulk are definitely figures of children’s imaginations, as are most of Marvel's heroes. With all the pains Christopher Nolan has gone to in creating his ultra-realistic 'Batman' films, it just feels like a big crime epic with Batman wedged in. Where instead of believing a man can fly, Nolan wants you to believe a billionaire can take on the mob, with no more than hi-tech gadgets and a psychotic need for justice. Marvel on the other hand said quite loudly, "FUCK THAT!" and kept their colourful roster of characters as close to their comic incarnations as possible, reality be damned. 'The Avengers' feels and sounds just as a live action comic-book movie should and this is thanks to the decision of keeping the characters as recognizable as possible, Iron Man's suit looks like it should, Thor's got his helmet and red cape, even Cap is proudly wearing the red, white and blue. If they had like others strayed too far from the original incarnations it would pose the query: "What’s the point?"

Taking risks of course has always been the backbone of these movies and you can thank Marvel head honcho Kevin Feige for that. It takes balls to commit to something as unproven as 'The Avengers'. Take 'Iron Man' for instance: what other studio would entrust it's entire future to a washed up actor, who had only recently been rehabilitated from a lifelong drug battle and a director whose previous movie was the unofficial sequel to 'Jumanji'? 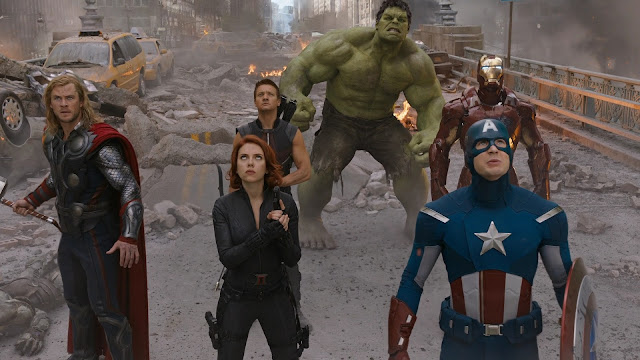 So far Marvel has managed to sway fanboy anger by fully committing to their choices, whether expected, Ed Norton as the 'Hulk', or unexpected, Kenneth Branagh directing 'Thor'. This has brought them to the rewarding moment they now enjoy, but surely as the movies expand into continuing sequels and unknown heroes step forward there will be a mis-step somewhere in their master plan. For the moment though, Marvel has managed to create the impossible, a worthwhile, true! comic-book movie, that with the surprise guest at the films closure ensures things are only going to get more mind blowing, as the wait for Thanos and 'Infinity Wars' draws closer.
2012 Forgotten Films Joss Whedon Marvel Some Words On Super Hero