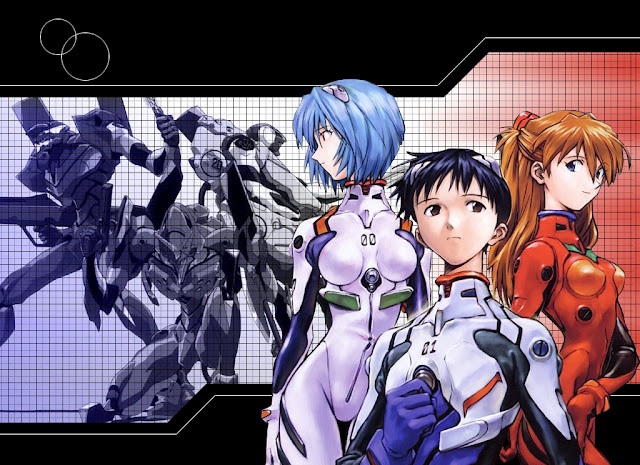 'Evangelion: 2.22' is the second part of a planned four film 'Rebuild' of the series 'Neon Genesis Evangelion'. Originally airing in October 1995, the series would go on to become a massive hit with anime fans, along with garnering several major animation awards. An apocalyptic Mecha, action series, the show revolved around the efforts of the paramilitary organization known as 'NERV', as they fight monstrous beings called 'Angels'. Assisting them in this arduous task are giant being known as 'Evangelions'. These vast humoid Mecha are piloted by a select group of teenagers, Shinji Ikari, Rei Ayanami and later Asuka  Langley.

Events in the series use a number of Judeo-Christian symbols from the Book of Genesis and Biblical apocrypha. Later episodes deconstruct these themes and motifs, as the story shifts into a psychoanalysis of the pilots, who display various emotional and mental disorders. These radical ideas were mined from experiences suffered by creator Hideaki Anno, who prior to working on the show was diagnosed with clinical depression. Incorporating his own personal trauma's, Anno infused his dark thoughts into the very fabric of the show, leading to a unique and unsettling experience. 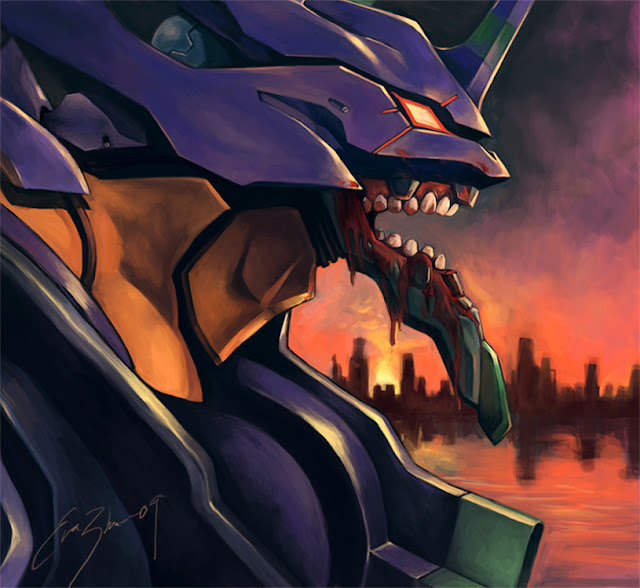 When the series finished, the final set of episodes from 21 – 26 were met with serious contention from fans. In the original show the series ends in an ambiguous, nightmarish way, that left viewers cold and frustrated, with most feeling cheated of a satisfactory resolution. Later, as the series was released on various home video formats from VHS, Laserdisc and DVD, revised uncut versions of these final episodes were made available, until finally the decision was made to redo them entirely. This resulted in 'Death and Rebirth' a project created to bring the series to a satisfactory close once and for all. The first part 'Death' consisted of a highly condensed recap of episodes 1-24, while 'Rebirth' brought the first half of the new ending. This was later completed in the full movie event 'End of Evangelion', which was released in July of 1997, 'End' would offer an alternative interpretation of episodes 25 and 26, re-titled in the movie as ‘Love is Destructive’, and ‘ONE MORE FINAL: I need you’, respectively.

All this tinkering with plot left the 'Evangelion' mythology feeling like a patch work of ideas and differing visuals. So merging all these elements into one cohesive whole, ‘Rebuild of Evangelion’ was announced, to be overseen by Anno himself. 'Rebuild' was to consist of 4 movies, taking all previous material and condensing them into one consistent narrative, giving the story and viewer definitive closure once and for all. The first release, '1.0: You Are Not Alone' stuck almost verbatim to the first 6 episodes of the original TV series, only drifting into new territory come the end. The next movie 'You Can (not) Advance' was seen by its creators as a familiar journey with fresh scenery, as 2.0 thankfully takes the nostalgic shackles off 'Evangelion' and breaks into a more exciting world, delivering a stronger, more filmic narrative, taking it's familiar characters down stranger more conflicted paths.

While the characters in the first 'Rebuild' felt too overtly tied to the story of old, 2.0 thankfully lets them grow, bond and bicker in ever more dangerous, destructive ways. As their own personal and social problems slowly erode their minds, we get some truly amazing Mech battles, that are among the finest I have seen in an anime. Also highly present is the religious and political Dogma that ran through the original series. There are numerous references to biblical names and objects, that results in a number of striking images. This religious subtext is a great addition that enriches the overall experience, adding a mysterious air. These additions give the movie a definite edge over other anime, take for instance the striking image of a burning crucifix lighting up the sky as an 'Angel' dies in a volcanic eruption of red crimson blood. 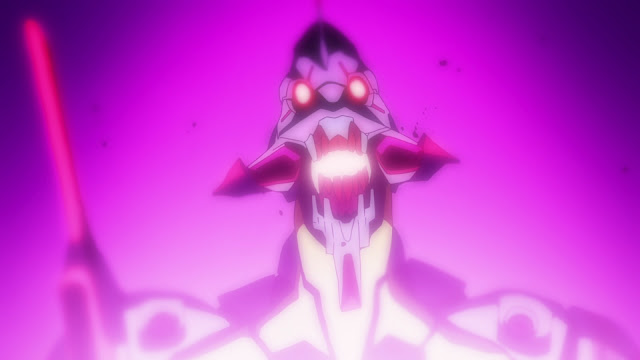 Roughly incorporating episodes 7 to 19 of the original series, with a little dash of 'End' thrown into the mix, '2.0' has of course divined fans with its bold choices, but most are happy with the results. One of the biggest changes and the most significant, is the addition of new Eva pilot 'Mari Illustrious Makinami', whose introduced in the excellent opening battle scene, where she uses an outdated 'Eva Provisional unit 05' to fight the resurrected skeleton of the 'Third Angel', at 'NERV's' arctic Bethany Base. I personally think 'Mari' makes a great addition to the movie, if anything her screen time is cut way too short, I would have loved to spend more time with this plucky, randomly swearing pilot.

For fans of the series, this movie can be seen as the most consistent and well rounded addition yet to the 'Evangelion' world. There are some genuinely surprising twists here, as the danger ramps up and the 'Angel' attacks get ever more severe and dangerous, especially come the stunning finale. A finale that will have you feeling there might not be anybody left alive to star in the next instalment. It’s this level of uncertainty upon entering the next chapter that has brought back for me, and other fans of the anime a feeling of excitement again. As the world hangs in the balance and total annihilation beckons, what other surprises await us next time? Evangelion 2.22 is a startling achievement that adds new layers to the mythology, while at the same time being respectful to what came before, for me this stands shoulder to shoulder with the best anime movies ever made.
2009 Anime Forgotten Films Mecha Movies I Love Neon Genesis Evangelion sci-fi