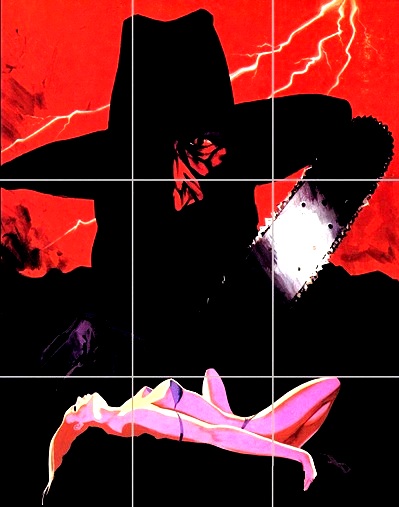 Absurd. Demented. Perplexing. Mind-blowingly Violent. And that’s only the opening 10 minutes. Welcome one and all to the trash classic 'Pieces', a crazed fever dream one might have if you watched a 100 slasher movies in a row, while consuming an entire cheese wheel...yes really! 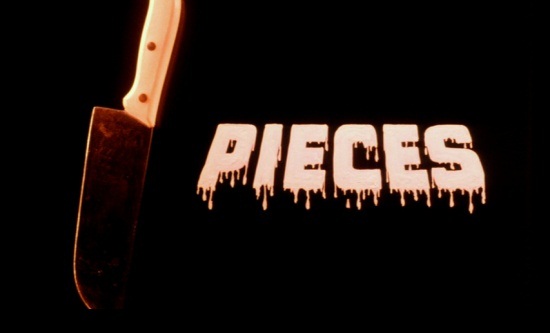 Opening in 1942, we see a young boy assembling an erotic jigsaw puzzle, soon he is rudely interrupted by his angered mother, who immediately begins scolding him over the puzzles nude content. When she tries to confiscate it the boy gets enraged taking an axe he hacks her into PIECES! Years later at a Boston campus, someone is carving up young girls with a chainsaw, could the murders be the work of the boy now grown? With the murders getting ever more violent the police are left scrambling to uncover the identity of the killer, who shows no sign of stopping, at least not until he harvests every last piece of his murderous human jigsaw.

'Pieces' Exists in that bizarre realm of exploitation cinema, where bad taste and schlock exist in a symbiotic state of bliss. In this filth paradise chainsaw wielding killers happily murder badly dubbed, shockingly inept actresses, while bumbling policemen wrap themselves up in a number of inconsequential clues, until the painfully obvious suspect is finally revealed. So trying to make sense of what's happening at any one time can be a hard and pointless task. While the movie does try to be part slasher/whodunit, it's mostly just 'bat shit crazy' and it's all the better for it. 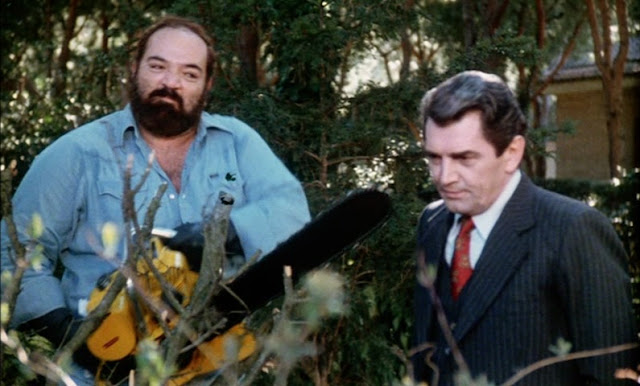 Take the jigsaw obsessed killer who has the uncanny ability to hide said implement behind his back in a small elevator unbeknownst to his clueless victim. Or what about the giant rage fueled obvious red herring gardener, who casually beats up policemen without reprimand. Even a crazed karate teacher makes a sudden, unnecessary appearance, only to quickly disappear again. The most confounding of these moments has to be the scene of a young girl on roller blades crashing into a pane of glass, smashing it. The girl is never mentioned again and the scene seems to have no purpose in the movie, except as a visual reference to the movies title, as the glass breaks into 'Pieces'. NOTHING MAKES SENSE!

There are so many of these wonderfully strange moments that you'll find yourself scratching your head in utter disbelief, while simultaneously struggling not to fall over laughing. The ending in particular is an out of nowhere crazy conclusion, that I can only imagine was put in by the director as he needed one last fright. A world away from what a good movie is expected to be, 'Pieces' happily revels in its own filthy fowling. If you're a fan of 'so bad its good' cinema, please pay a visit to the upside down world of 'Pieces', as it continues its destiny to entertain the intoxicated horror fan for quite some time to come. 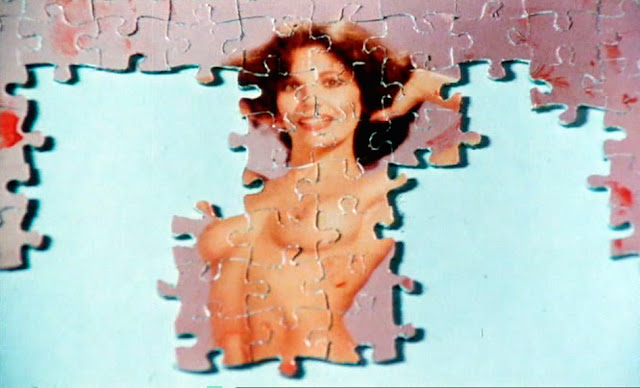 Recently 'Pieces' has gained a medium of notoriety thanks to motor mouth director Eli Roth (Cabin Fever, Hostel) whose championed it as a personal favourite. Its easy to see what particular delights Roth has mined from this, in fact its a darn sight more entertaining than his own flicks
1982 Dubbed God I Love '80s Slashers Gory Horror Pure Cheese Slasher Spanish