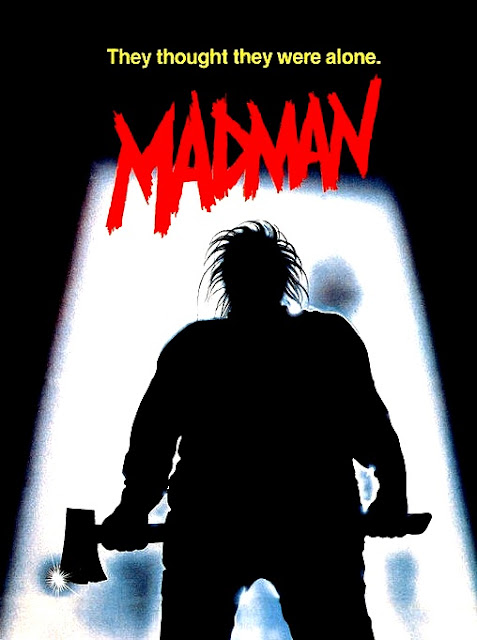 After the unexpected success of seminal slasher ‘Halloween’ (1978), and its most iconic imitator ‘Friday the 13th’ (1980), the floodgates opened and over 250 slashers were released throughout the '80s. While most have now been embraced by fans, others like ‘Madman’ continue to be denied the recognition they rightly deserve.

Opening with a familiar slasher scene we see a small group of people gathered around a campfire at North Sea Cottages - a special retreat for gifted children. Illuminated by the warm glow of the fire, the adults and children listen intently as head counselor Max recounts the grisly urban myth of Madman Marz. A farmer who in a moment of crazed horror murdered his entire family with an axe, after which he was beaten and hung by a mob of angry townspeople who discovered his heinous deeds. Later, when they returned his body and that of his wife and children had disappeared, leaving a lasting curse over the woods. The house where these atrocities were committed is not far from the campers, and it is said that Marz still lurks somewhere close by, watching, waiting for any that dare cross his path.

Finishing this gruesome tale Max eyes his captivated audience and leaves one final warning, "Don't dare say his name above a whisper, or Madman Marz will come for you". Of course, no sooner has he finished his story when one of the kids instantly jumps to his feet and shouts the killers name, even brazenly smashing a window of his nearby home. With this thoughtless act he unknowingly incurs the wraith of the unstoppable murderer, sealing all their fates.

It’s taken me about 10 years to finally see this movie and I must say it was worth the wait, while the meandering pace might be a small point of contention for some viewers, thankfully the deaths are pure head chopping gold, with most of the effects still thankfully holding up today. 'Madman' does set itself apart from the crowd with a number of unique aspects, such as the whole movie taking place over a couple of hours, as well as the cast being mostly adult characters, over the clichéd troupe of horny drunken teens. Another interesting aspect is the music by Stephen Horelick, which perfectly sets the films '80s tone, it being a nice mix of john carpenter synth, and Saul Bass strings.

There are so many favourite moments in 'Madman' I can hardly keep track of them. I love the shot of Marz hiding in the trees, his black shadow contrasted against the unnaturally blue sky. Or how about the moment Betty (Gaylen Ross) and her love interest T.P, enter a hot tub and before making love somehow manage to slow dance while immersed in the water. The fridge scene, which I won’t spoil here, is another moment of comedic disbelief. It's these elements of trash that make '80s slashers so much fun, and for good or bad you just don’t see in movies anymore. While not as accomplished as the original 'Friday', or its other most notable setting stealer 'The Burning', 'Madman' is still a cheesy blast, and one that should satisfy any '80s slasher fanatic.
1982 Gaylen Ross God I Love '80s Slashers Horror Slasher