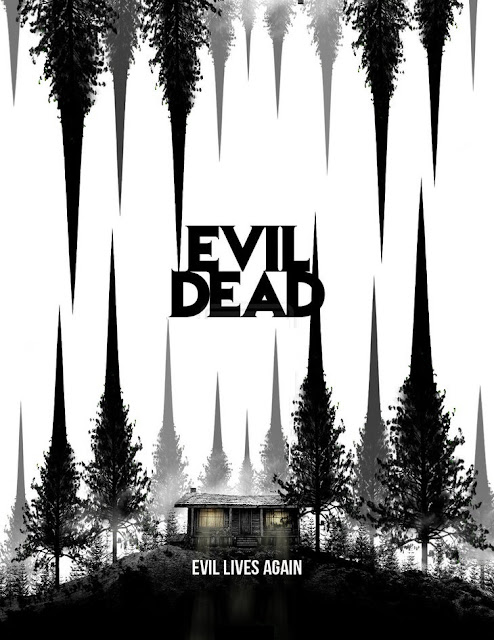 Another year, another sacrificial cow brought to cinematic slaughter for a new generation to ingest. Except this time it’s Mr. 'Evil Dead' himself Sam Raimi with the carving knife in hand. In fact he and original star Bruce Campbell produced this 'Hollywoodifed' version of their career defining horror classic of low budget invention. So I guess if they thinks it’s a good idea to choke up cinemas with this sh*t, I suppose we must as well. Instead of Ash this time we get TV star Jane Levy (Suburgatory), the kid from 'Thumbsucker' (2005), the male lead from the awful Emo ‘Red Riding Hood' (2011) movie, and the love interest from 'Big Momma’s House 3’ (2011). Please someone stop the Goosebumps from emerging on my hairy arms! 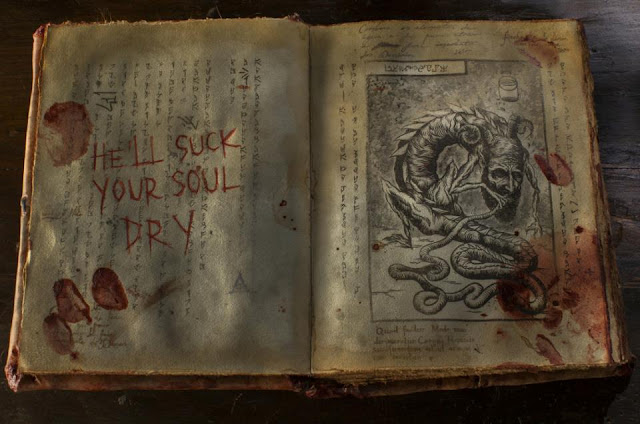 Never the less, like a good little horror fan I found myself sitting in the cinema, with expectations running dangerously low and my blood sugar levels happily running high -  after a gorging of candy - I was about as ready I ever would be for 'Evil Dead' 2013. It starts off promising enough with a a suitably over the top and well crafted opening scene, as a young girl is set on fire by her father, who subsequently blasts her burning head off with a shotgun, "Hey maybe this thing has a chance after all", I foolishly thought. Then of course the dead eyed cast shuffle onto stage, and like a dazed deer caught in the headlights of on advancing automobile, I knew the inevitable was coming.

20 meandering minutes later I was about ready to right the whole thing off. After numerous ominous warning, a few nods to the original - hey look it’s the Oldsmobile Delta - and enough close up shots of weapons and tools that will inevitably be implemented at some point later in the story, the splatter finally starts. After all the effort of trying to make us care for these bullshit caricatures, we finally get a gratuitous sledgehammer hit of ulta-violence, and thank 'Jeebus' it was almost worth the wait. You see the one saving grace, should I say the only redeeming excuse, for these reboots, remakes, re-imagining, re-awaken me when I fall asleep, boring ass movies to exist is the implementation of accomplished gore effects. Admittedly the sharp snap of realistic grue is favourable over the fake looking 'MacGyveresque', let’s make a flesh would out of oatmeal and latex effects of the original '70s and '80s horror movies. In this department 'Evil Dead' 2013 - no it’s not 'The Evil Dead' anymore, it’s just 'Evil Dead', the 'The' is just so not cool right now - has a considerable advancement over the ridiculously amateurish, but no less charming, effects of the original.

You might have heard, sorry screamed, from the countless publicity campaigns and interviews that yes every effect in this movie is created practically, using no CGI, YOU GOT THAT! NO CGI! Okay, so the shoot took like 70 days because they went old school, but hell I’ll admit it, it looks cool. Personally I hate CGI blood, it just never looks right, whenever I see it on screen I can’t help wincing at the natural site of it sloshing around, so the fact that this remake spares us that horror I’ll give it a bit of a mild pass. As for the acting, direction, music, script, tension, atmosphere, it’s all so serviceable you end up giving little to no shit about it, this is just another glossy title on its inevitable journey from cinema to bargain basement bin.

You might think I'm being particularly harsh on the movie and in truth it's not even particularly bad or any worse than the other bland remakes, it’s just the sheer laziness of everyone involved. While it was cool to go to the cinema and see a hardcore gore pic, I just wish it wasn’t a f**king rehash of something I was detrimentally familiar with. How I long for the crazy days of '70s and '80s exploitation cinema, when the rules were happily thrown out and an entire generation got there repressed carnal desires and raging ideals out onscreen in a cathartic release of pure unadulterated celluloid madness. I, like my VHS brethren long for the return of those hazy all or nothing glory days, hell I’d watch anything good or bad from '8os horror cinema, over these new clean cut fright fests of today. I’m just so sick of orchestrated frights and 'Paranormal' endless 'Activities', with their pretty casts of white boys with sick abs, and girl next door cookie cutter  actresses getting carved up in the same old ways, in the same movies that I was watching 10 years ago!…Ok breath, happy place, find your happy place! 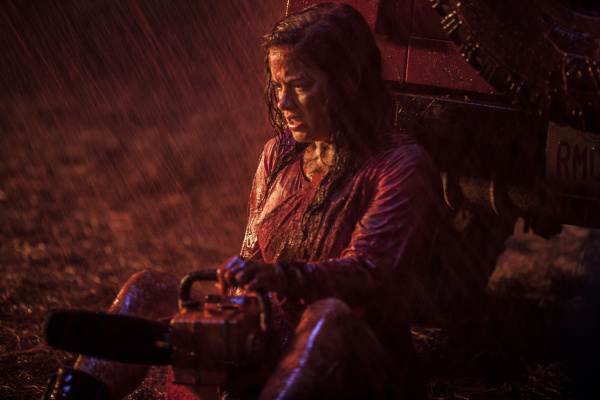 In summation I’ll leave you with one final thought, I’ll admit I’m not the biggest 'Evil Dead' 1 fan In the world, it's a good movie, but the 'balls to the wall' sequel is vastly superior in every way. I’ve seen part 1 maybe 4 or 5 times over the years, and I’ll admit I don’t love it like its hardcore fan-base. Saying that, there is a scene in the movie that always sticks in my mind, it’s a simple little moment where Bruce Campbell as Ash  walks through the cabin, the camera looming over his head, suddenly it passes over some beams and for no apparent reason each time it does a sound emits, a kind of 'whoosh' sound. I remember that moment more clearly and vividly than I do the whole of this new film and it's only been 12 hours since I watched it, what does that tell you?

Just like 'Last House On The Left', 'Nightmare On Elm Street', 'Psycho', 'Texas Chainsaw Massacre' and so many countless others, this stands as nothing more than a fruitless exercise in sucking the creativity and originality out of a classic film, existing as nothing more than a  by the numbers fright fest, which is a shame. Another horror remake is unleashed onto the world, is it terrible? No. It's just so mind numbingly serviceable, the gore will no doubt state your interest enough to keep you awake, just don’t hold out for anything more. If you’re a remake hater this will only fuel your fan rage, on the other hand if you’re one of the few who enjoys these kind of water down, compromised cinematic travesties you might get a kick out of it. Please don't hate me!
2013 Bruce Campbell Evil Dead Movies Gory Horror Sam Raimi Some Words On